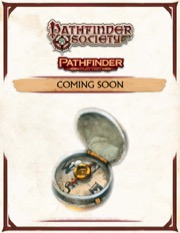 Although most of the Society’s discoveries come from distant lands and enter through Absalom’s harbor, some of the greatest discoveries appear in the metropolis’s backyard. When an extraordinary relic surfaces in the nearby town of Diobel, the Pathfinder Society dispatches an agent to recover and transport it back to the Grand Lodge. That strategy fell through when the agent disappeared along the road to Diobel. The Pathfinders must learn what befell their comrade and recover the shipment—a task that will take them into the dangerous wilds of the island’s interior.

by: Dragnmoon
See All Pages

I'm sorry, but we no longer support this web browser. Please upgrade your browser or install Chrome or Firefox to enjoy the full functionality of this site.